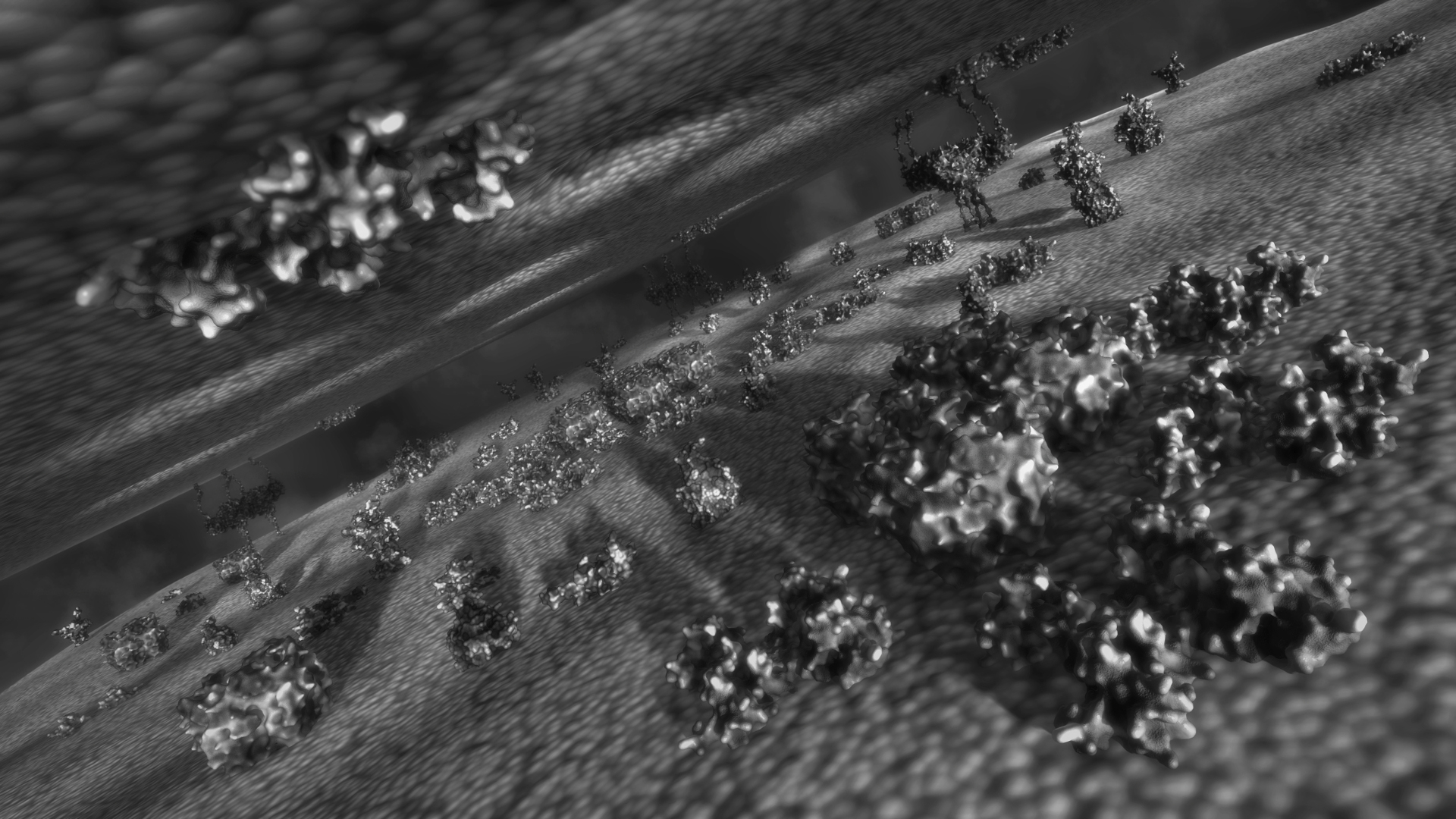 The activity of our brains, one of the most complex machines in Nature, can be described as the work of active connections among the several billions neurons within our heads. These cells, the neurons, communicate to each other at specialized sites, called synapses, that transmit information through a complex mechanisms that transforms an electrical signal into a biochemical one, back and forth.

Synapses are very small structures whose size is measured in micrometers (about one hundredth of a millimeter), and are classified by their types. Each synapse has a specialized type of receptor that recognizes one of several molecules; synaptic activity is also determined by its location in the brain. One type is the serotoninergic synapse, whose main transmitter molecule is Serotonin, a neurotransmitter strongly involved in mood regulation.

The work presented here, The Dark Anim, was the result of an effort aimed at showing the inner working of Serotonin and of one of the drugs (fluoxetine, aka Prozac) used when its metabolism is dis­regulated. The work was commissioned by Filmtank to be inserted into a full length documentary, titled The Dark Gene, by directors Jakobs and Schick.

Even for scientists, who naturally want to adhere strictly to scientific knowledge, there is always a major input of creative choice in the preparation of such animations. Besides deciding the cameras, lights, and movements of the protein characters, we had to devise a way to visually explain how an electric pulse brings about all the events that lead to neuronal excitation.

The overall impression is reminiscent of Scanning Electron Microscopy images, but with a sort of ‘underwater feel’ that should elicit in the viewers the sense of living matter.

The SciVis group was set up by Monica Zoppè, a biology researcher in the Institute of Clinical Physiology of the National Research Council of Italy, with the idea of making visible life at nanoscopic level. We elaborated a visual code designed to convey information stored, or calculated in molecular structures, and a method for elaborating protein motion, based on a game engine. The starting material is atomic coordinates (up to several thousands) that compose the object; this is elaborated using a number of programs developed within the scientific (VMD, pyMOL) and the graphics fields (Blender). The primary information delivered is the shape and movement of the molecules, which are inserted in an artist­ created environment, based on sound biological information. The forces that determine protein behavior, electrostatic and lipophilic potentials, can also be represented, as special effects (electrostatic field lines), and as a pattern of texture on the molecular surfaces.