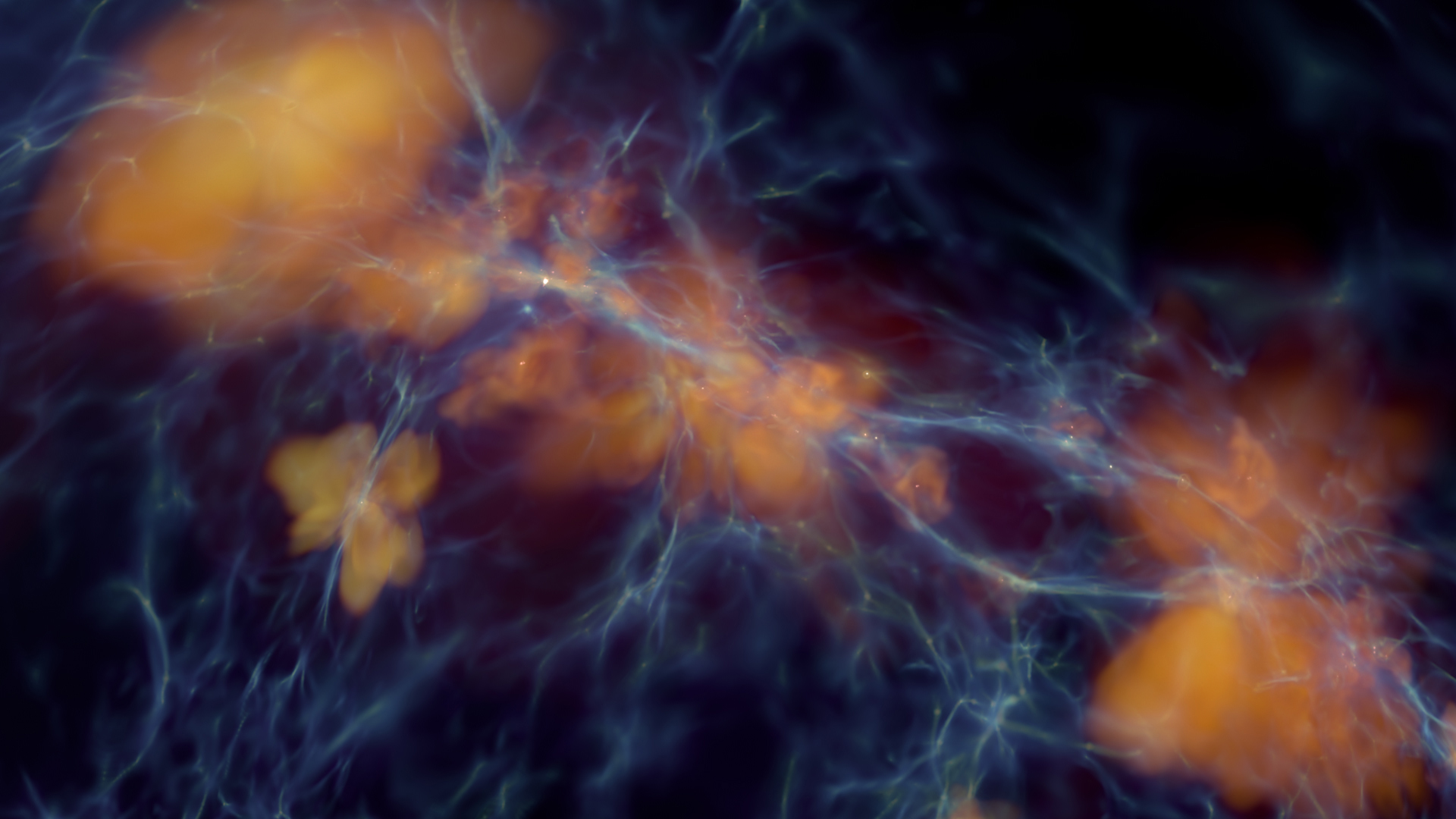 The Advanced Visualization Lab worked with astrophysics data scientists to create data-driven cinematic scientific visualizations which represent the life cycle of stars and the dynamic processes of our sun.

In the first shot of this sequence of excerpts, we visit John Wise’s simulation of the early universe, which shows the formation of the first generations of stars. Three features were targeted in this visualization: the blue dense filaments along which stars form; the large orange regions of gas which become ionized and heated as new stars begin emitting lots of ultraviolet light, and later cool off after those stars’ lives end; and the heavier elements mixed into the gas after those dying stars explode as supernovae, forming small bubbles of high “metallicity density”.

The second shot in this sequence, another of John Wise’s simulations, examines the life and death of a single first-generation “Population III” star, looking in detail at the processes that mix the heavy elements into their environment. Using advanced computer graphics techniques, the AVL was able to iteratively produce high quality cinematic renders of thousands of John Wise’s multi-gigabyte datasteps in approximately 71,500 compute-node hours on the Blue Waters supercomputer.

In the last three shots of the sequence, we observe Mark Miesch’s and Nick Nelson’s global 3D simulations of convection and dynamo action in a Sun-like star which reveal that persistent wreaths of strong magnetism can be built within the bulk of the convection zone. The star’s rotation organizes the convective cells, which form long rolling “bananas”, rendered in the orange regions of the sequence. Tracer particles show the fluid circulation, colored yellow/orange by vorticity. Buoyant loops in the magnetic field, seen in the final shot in blue, are carried along by these “bananas”.

The AVL’s mission is to communicate science, inspiring audiences to learn about scientific concepts through capturing the thrill of scientific discovery and wonder of complex systems. Working in close collaboration with domain scientists, AVL creates high-resolution, cinematic, data-driven scientific visualizations. The AVL shares its work with the world through shows featured in digital full-dome planetariums, IMAX theaters, and documentary television.